<edited> she drafted this post before quitting her job. coz she absent-minded-ly forgotten about this. now she no longer need to work. she’s now blogging from Pak Li Kopitiam. </edited>

this is da most nerve-wrecking part when filling up an employment information form.

before u ask y, read down first.

her first ever job was as a AnQinJieJie (安亲姐姐) in a primary school.

what is AnQinJieJie in English u say la.

nanny? how can write that in your resume?

that’s WHY she would cleverly translate it into kindie teacher.

still remembered that it was 5bucks per hour. and she only gotta work for 5hours per day.

and she did daily was,

showered them (both boys and gals. and those boys were NOT shy at all to show her thier birds. tiny ones. :P), had free lunch together with children, supervised them doing homework, then had some entertainment like singing or watching movie. and then went home.

u think what an easy job, right?

but let her tell u ar, damn tired one ok.

she is well-known for disliking babies and kids.

she had to shower them so that she could control da direction of pipes so that seh would not be wet.

she had to feed them so that they would not take an hour to finish their meal.

she had to bring candies for them every-freaking-day so that she could use them as bait to force them to finish their homework.

and for so many times she wished to strangle them so that they could FarkTheShutUp and then she could enjoy peace which only lasted for one second.

and this job as a Kindie Teacher lasted only for a month. coz she had to enrol into NS.

she had her second job after completing Form 6 while waiting to enrol into Local Uni,

was as a promoter of Pierre Cardin in Parkson.

da whole half a year holiday, she worked only four days 😯

not that she cannot tahan and quit ok.

until legs also can patah ok.

that’s when ann knew money is not easy to earn.

every night when ann got back home after home,

and her third job was as a Digi promoter in May 07′ in Tesco and Mahkota Parade.

that’s datime she knew that it’s harsh to being turned down by people.

not one nor two,

she confirmed she approached hundreds people over 7days.

she heard u saying that!!

u are asking WHY her working period always that short one?

it’s only a promotion fair ok. 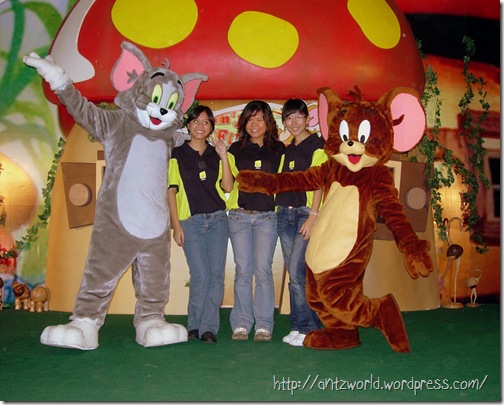 best part of this job, being able to snap with Tommy&Jerry! in da middle of promoting Digi Postpaid.

right after da fair, she worked as a promoter in Wild Channel outlet in Mahkota Parade.

this time, not four days,

this is da only place ann will NOT go back and work again.

she gives u her words.

and then, during semester break she will become a SangKoMui at YiYi’s stall.

this is da job she doesn’t get any pay.

u say la where to find this kind of LouBanLeong la.

and now, she works as a, er…actually she also doesn’t know what’s her post le.

this is her first whole-day-sitting-till-butts-go-numb-encore job.

only when customers come in then has to get da butts off da chair to serve them.

eh, she suddenly remembers that she started working at a young age of 5/6/7 years old!

helped PoPo and YiYi at their chapfan (mixed rice) stall.

of course she’s not helping them cooking la

she helped them to keep plates and serve customers with forks and spoons and wipe tables and help them to finish up those leftovers.

she especially lurved lalas that she hoped no customer would choose lalas so that ann could have them all.

that was those days in Section 14.

now, both were gone.

and Jaya will be bombed down. 😦

that’s those jobs she can remember.

u tell ann la, what to write bout her working experiences.

or a promoter who worked for one-month-and-four-days?

or a *insert whatever u think she is*…

2. as a Digi Promoter

this is what she wrote in her personal information form for her latest previous job.

so informal and unglamour at all

that’s da only she could think of u know.

or u got any idea to beautify her working experiences ar?